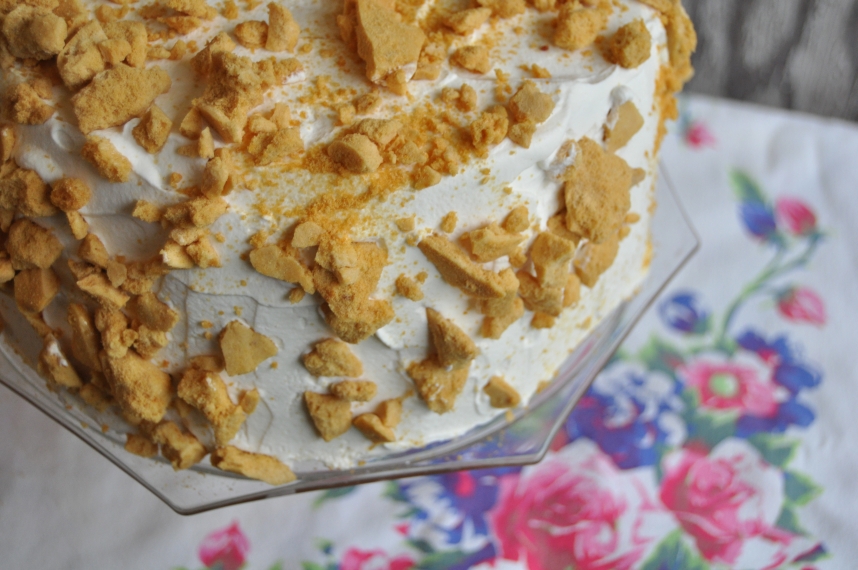 Like most people who love to cook, I have an ongoing list of dishes I’d like to make one day. My list consists of various items found in magazines and cookbooks, classics that I have yet to tackle (like osso bucco and fresh pasta), things that I’ve eaten in restaurants that I want to recreate at home, and old family favorites. Now that I’m an adult I realize how fortunate I am to come from a family that loves food. My paternal grandparents were wonderful cooks. Because of them and their love for preparing delicious meals for their family, I really do appreciate a good home-cooked meal and homemade desserts.

My grandma’s coffee crunch cake is one of those family favorites that I’ve wanted to make for quite some time now. I think it might have been one of the best things I ate as a child. Who wouldn’t like a three layer cake covered in whipped cream and toffee? I know I’ve mentioned my grandma and her amazing baking before, but I just cannot say it enough – she was everyone’s favorite baker in her day. And now that she’s well into her 80’s, she’s become my favorite taster. If she says likes something that I’ve made, I know in my heart I’ve got a winner on my hands because she is not the kind of woman who just throws around compliments, especially when it comes to food.

A few weeks ago, while having dinner with Grandma, I mentioned that I wanted to make her coffee crunch cake and asked if she still had the recipe.  To my surprise she said she did (my mom always talks about the way Grandma could bake without even measuring ingredients so I fear that some recipes will be lost forever). And then she mentioned Blum’s. I didn’t realize what she was saying at first but then it became clear to me; the coffee crunch cake that I grew up with was actually an adaptation of Blum’s famous coffee crunch cake. Blum’s was a bakery in the heart of San Francisco’s Union Square (there were other Blum’s shops around San Francisco and also in Berkeley and Palo Alto). It was the kind of place where people would go after a long day of shopping at Macy’s or I. Magnin (the ladies who lunch set of those days likely frequented Blum’s). My grandma was born and raised in San Francisco and I can imagine her and my Great-Auntie Teiko going to Blum’s and eating coffee crunch cake. Unfortunately, Blum’s closed in the 70’s but their famous cake lives on in a few bakeries in San Francisco, including Yasukochi’s Sweet Stop in Japantown.

A few days after our dinner, I had a photocopied newspaper clipping with Blum’s recipe in my possession. After reviewing the recipe I realized that the individual elements of the cake are quite simple – sponge cake, whipped cream and a toffee like topping. Together, however, they create the most magnificent confection. It is the perfect combination of light, airy, creamy, crunchy and sticky with just the faintest lemony vanilla flavor. This cake is what the sweetest of dreams are made of. It’s the kind of cake that would’ve inspired a Wayne Thiebaud painting, full of old world charm and elegance. When I brought the cake to our last family dinner, I can’t describe to you how pleased my grandma was – she said she couldn’t believe I made it. I could see the pride on her face when everyone ooh’d and ahhh’d as it was being served. It was a delightful experience, for myself and for all of the other coffee crunch cake fans. As Grandma says, it was just delicious. 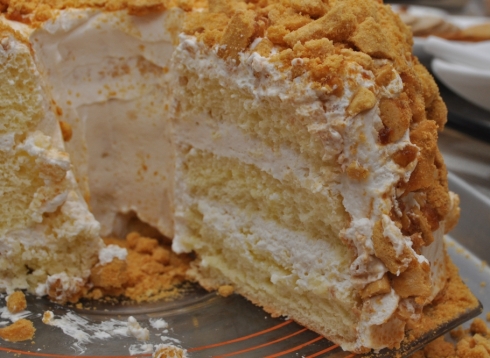 Adjust rack in the lower third of oven;  preheat to 350°F. Sift flour, 3/4 cup sugar, and salt onto a sheet of wax paper; set aside.

Using an electric mixer, beat egg yolks with 1/4 cup sugar until thick and pale yellow. Add water and beat until thickened, about 4 minutes.

Whisk egg whites in bowl of a heavy-duty mixer just until frothy. Add cream of tartar; whisk until soft peaks form. Add remaining 1/2 cup sugar in a steady  stream, whisking until thicker, stiffer, glossy peaks form – about 2 to 3 minutes. Whisk in vanilla, lemon juice, and lemon zest. Pour yolk mixture over whites. Fold together with a rubber spatula. Sprinkle a third of the flour mixture over the egg mixture; fold to combine. Repeat two more times just until ingredients are incorporated. Gently pour batter into an ungreased 10-inch round tube pan with a removable bottom (such as an angel food pan). Level top with a spatula.

Bake for 50 to 55 minutes, or until top springs back slightly when lightly touched. Invert pan over a long-necked bottle to cool for about 45 minutes.

To  remove cake from pan, slip a flexible metal spatula down one side of pan; slowly trace perimeter to release the cake. When sides are free, push up on bottom to release cake. Tilt cake with removable bottom still attached, and gently tap bottom against counter to loosen cake. Rotate cake, tapping a few more times, until it appears free. Cover cake with a rack and invert; remove bottom of pan.

for the coffee crunch topping:

Generously oil a large baking sheet or line with a silicon mat or parchment paper; sift baking soda onto a sheet of wax paper; set nearby.

Combine coffee, sugar and corn syrup in a heavy, 4-quart saucepan. Place over medium-low heat, stirring occasionally, until sugar dissolves. When mixture is clear and begins to boil, increase heat to medium-high; cook until mixture reaches 290°F on a candy thermometer. Toward end of cooking (around 270°-280°), stir occasionally to prevent mixture from scorching and becoming too foamy. Remove from heat and stir in baking soda (mixture will foam up fiercely). While still foaming, pour out onto prepared baking sheet. Do not spread; let cool undisturbed for at least 1 hour.

Crush into very small pieces. (Place between two sheets of wax paper or inside a freezer size ziplock bag and tap with a rolling pin). Store in an airtight container.

Just before serving, generously sprinkle top and sides with the coffee crunch.

***Update 6/10/2012: I hadn’t revisited this post in over two years and just realized that there was a discrepancy in the instructions involving the amounts of sugar being added to the cake batter. It has been corrected. Huge apology to anyone that experienced issues with this. 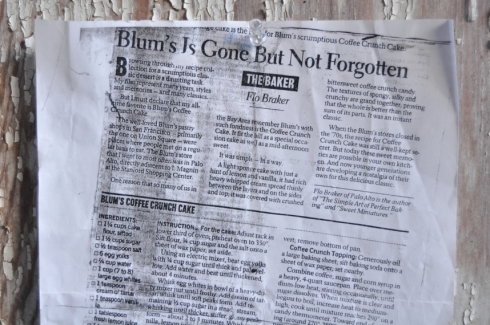