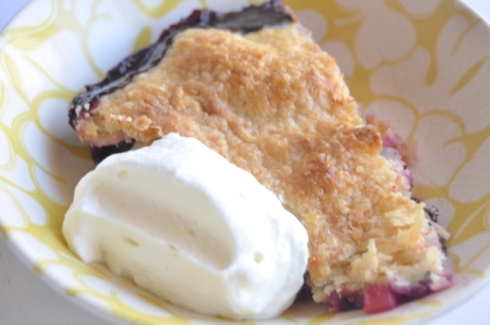 I mentioned last week that I had a whole lot of peaches on my hands, so in my effort to make sure these beauties didn’t go to waste, we’re having an end the of season peach double-header. Though I was tempted to make obscene amounts of peach ice cream, I had to abandon that dream as I have limited space in my crazy freezer. And then I remembered pandowdy.

The first time I had ever heard of pandowdy was just a few years ago, when Rodney, my father, insisted that an apple cake I had made tasted just like an apple pandowdy from his childhood. Apple huh? Pan what? I was sure he was making this up until I did a Google search and found this. A pandowdy is basically a fruit pie sans bottom crust, and though my cake was not even slightly reminiscent of a one-crust pie, I was a little bit  intrigued by this silly name, which easily could have been just another Rodney’ism.

I was trying to figure out why someone would make a pandowdy rather than a good ol’ double crust pie. I guess maybe if you were being carb conscious, you might eliminate the bottom crust of a pie in the manner that one would eat a burger with only one bun (though if you were being carb conscious you probably wouldn’t be eating dessert). And then I thought about all of the work that goes into rolling out pie dough and while it’s not difficult, it can definitely be a bit time consuming. So maybe it’s a sort of lazy man’s pie, which is kind of perfect for summer if you ask me.

A few weeks ago I flagged this recipe for peach pandowdy. And then, of course, forgot all about it. Luckily, seeing all of those peaches reminded me that I had business to take care of. So I handled my business. There is something really beautiful and rustic about pandowdy, especially when baked in a cast iron skillet. Initially, I felt that the ginger in this recipe was a bit overwhelming, but after it cooled for an additional hour, it seemed less intense and I actually rather enjoyed that unexpected hint of ginger. While I really liked the peach and blackberry combo, I feel that this would be just as good with the blackberries omitted (which is what I’ll try the next time someone brings home a lifetime supply of peaches). Either way, it’s a winner. I like to think of this little number as summer in a skillet. Rodney will be thrilled. 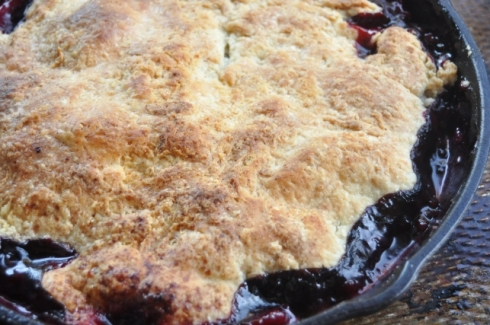 from Rustic Fruit Desserts by Cory Schreiber and Julie Richardson

For the pie pastry:

Put the flour, sugar, and salt in a bowl, stir to combine, then put the bowl in the freezer for about 10 minutes, until super cold.

Stir the water and lemon juice together, then drizzle over the dry ingredients, tossing with a fork to distribute the liquid. The pastry will be shaggy but should hold together when squeezed in the palm of your hand; if not, add an additional teaspoon or two of ice water.

Dump the pastry onto a lightly floured work surface and press down on the dough, folding it over on itself a few times until it holds together. Try not to handle it too much, or it will warm up and may become over-developed. Divide the pastry into 2 equal parts and shape each piece into a disk 1 inch thick. Wrap each disk in plastic wrap and chill for 1 hour.

Preheat the oven to 425°F. Butter a 9-inch deep-dish pie pan (skip this step if you are going to bake in a cast iron skillet).

Wash the peaches, pierce the skins all over with a fork, then slice each peach into 10 to 12 slices, depending on the size of the fruit. Put the peaches in a bowl, add the sugar and lemon juice, and toss gently until evenly coated. Set aside for 15-20 minutes to draw out some of the juices.

Strain the peach juice into a small saucepan over medium heat and cook, stirring occasionally, until reduced by half. Rub the cornstarch, candied ginger, ground ginger, and salt together in a bowl.

Roll the pie pastry out a little larger than the diameter of your pie pan. Place the pie pan upside-down atop the pastry and use it to cut the pastry to size.

Add the cornstarch mixture and reduced juice to the peaches, add the blackberries, and stir gently until evenly combined. Pour into the prepared pan and top with the pastry circle. If the crust is a bit larger than the pan, tuck it inside the pan. Place the pie on a baking sheet to collect any drips.

Bake for 50 minutes, or until the crust is golden and the fruit is bubbling. Cool for 1 hour before serving, topped with a scoop of vanilla ice cream ( I liked it best after it had cooled for about 2 hours).

This dessert should be eaten soon after it is made, but any leftovers can be covered with a tea towel and stored at room temperature until the next morning.

Summer almost always arrives late in the Bay Area. This year was no exception. We finally had a few real-live summer days the last week of August; it was a record breaking 95° in San Francisco! Needless to say, it was pretty spectacular, especially considering that this summer has been a bust as far as the weather is concerned. So spectacular, that I did whatever I could to make the most of the heat (and find relief from my non-air conditioned house). I ate cold oysters on the half shell. I drank delicious beers and had what Sara and I refer to as “das burger” out on the patio of one of my favorite bars. I slept with an ice-cold water bottle in my bed which, by the way, is genius if I do say so myself. And I made ice cream.

Earlier this year I popped into Sur la Table to buy a cake pan. I came home with an ice cream maker. This is very typical of my behavior. It remained in the box for months just waiting patiently for someone to put it to use (also very typical). Meanwhile, I had been dying for an excuse to make ice cream. But it never got hot enough. And I’ve been preoccupied with other projects. So in the box it stayed. Until this little heat wave came along.

I requested a copy of David Lebovitz’ The Perfect Scoop from the library at the beginning of summer with the intention of putting my new ice cream maker to good use early in the season. I’ve recently adopted the practice of checking out cookbooks from the library before adding them to my permanent collection. I’m a bit of an impulse buyer(see above), so I think of it as a preventative measure. After weeks of waiting, the book finally arrived just as it was starting to get warm out here.

I love David Lebovitz. His blog is my favorite of all the food blogs I follow. It’s full of information about food and restaurants and Paris and Parisians (and their quirks) and sometimes the most random yet fascinating topics are addressed. I also find him hilarious. Seriously, the man is a riot and reading his posts always puts a smile on my face. I wish we were eating/drinking buddies or pen pals.

When several pounds of peaches magically appeared at my house, I took it as a sign to make peach ice cream. The combination of peaches and cream really is a no-brainer. One of my favorite summer time snacks is sliced peaches dipped in sour cream (don’t knock it till you try it). So I was pleasantly surprised to find that David’s peach ice cream calls for sour cream in addition to the usual heavy cream found in most recipes.

This ice cream is everything ice cream should be: sweet, creamy, refreshing and good to the last drop. The peach flavor was perfectly pronounced and the lemon juice and sour cream really tie it all together. I am seriously contemplating making a few more batches while peaches are still in season. But there are so many other flavors I can’t wait to try! Looks like The Perfect Scoop will be joining the permanent collection.

from The Perfect Scoop by David Lebovitz

Peel the peaches (see below), slice them in half, and remove the pits. Cut the peaches into chunks and cook them with the water in a medium, nonreactive saucepan over medium heat, covered, stirring once or twice, until soft and cooked through, about 10 minutes.

Remove from the heat, stir in the sugar, then cool to room temperature.

Puree the cooked peaches and any liquid in a blender or food processor with the sour cream, heavy cream, vanilla, and lemon juice until almost smooth but slightly chunky.

Chill the mixture thoroughly in the refrigerator, then freeze it in your ice cream maker according to the manufacturer’s instructions.

*An easy way to peel peaches is to cut an X at the bottom and then lower them in a pot of boiling water for about 20 seconds. Using a slotted spoon, transfer the peaches to a colander and shock them with cold water, then let them cool. Afterward, the peel should slip right off. 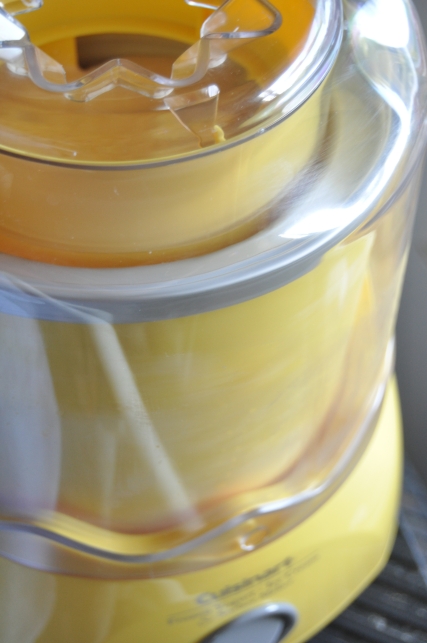