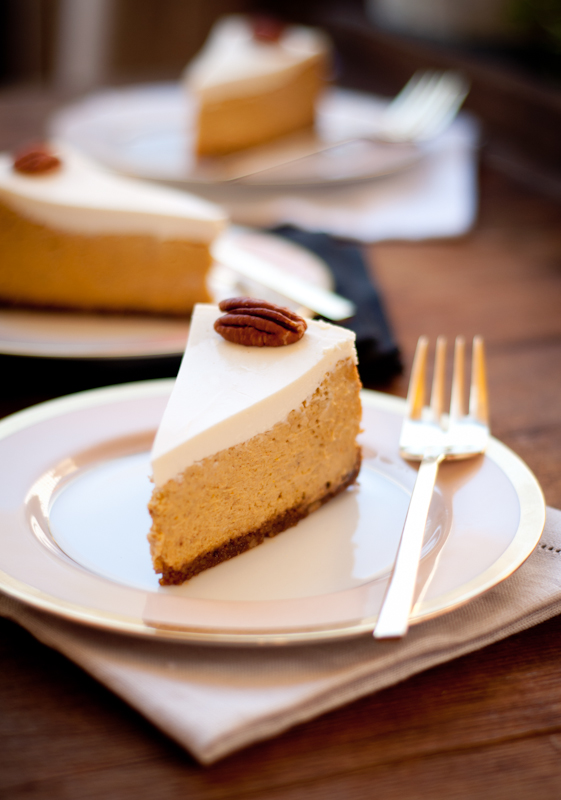 I know what you’re thinking. A little late for the pumpkin desserts, right? And I absolutely agree with you. BUT, I have made this pumpkin cheesecake four times in the past three weeks – twice before Thanksgiving, and two more on Thanksgiving Day. The first cheesecake I made on Thanksgiving morning fell to its death in the oven as I was taking it out, so that’s why there were two. I experimented, I made adjustments. I burned my hand on the blistering hot rack of my oven. And I did way too much sampling. Therefore, I present to you… bourbon pumpkin cheesecake.

I’ll be totally honest – I’ve never been much of a cheesecake fan. Only in the last five years have I come to appreciate cheesecake. But I never really go out of my way to eat it, and before three weeks ago, I had never made one. But since I’m convinced that pumpkin baked goods are almost always outstanding, and because I was bored with the idea of a traditional pumpkin pie, a pumpkin cheesecake sounded just delightful. And since I was racking my brain for desserts for this Thanksgiving, I set out for a recipe.

This is a winner, dear friends. It’s pumpkin and spiced and rich in that cheesecake way, but not as heavy as traditional cheesecake. It has a nice, tangy sour cream top, also giving it a really stunning finish. The pecan-graham cracker crust is just off the hook good – it’s a little nutty but also slightly caramelized, two pluses in my book. And it’s spiked with bourbon, which is what drew me in initially. This beauty is definitely a contender for Christmas. I’m pretty sure you’ll thank me later.

Invert bottom of a 9-inch springform pan (to create flat bottom, which will make it easier to remove cake from pan), then lock on side and butter pan.

Stir together crumbs, pecans, sugars, and butter in a bowl until combined well. Press crumb mixture evenly onto bottom and 1/2 inch up side of pan, then chill crust, 1 hour.

Whisk together pumpkin, eggs, brown sugar, cream, vanilla, and bourbon (if using) in a bowl until combined.

Stir together granulated sugar, cornstarch, cinnamon, nutmeg, ginger, cloves, and salt in large bowl. Add cream cheese and beat with an electric mixer at high speed until creamy and smooth, about 3 minutes. Reduce speed to medium, then add pumpkin mixture and beat until smooth.

Pour filling into crust, smoothing top, then put springform pan in a shallow baking pan (in case springform leaks). Bake until center is just set, 50 to 60 minutes. Transfer to rack and cool 5 minutes. (Leave oven on.)

Whisk together sour cream, sugar, and bourbon (if using) in a bowl, then spread on top of cheesecake. Place cheesecake back in the oven and bake 3 minutes.

Turn off the oven, leaving cheesecake inside to cool for at least two hours, up to three to cool completely. This prevents the top from cracking.

Chill, covered, until cold, at least 4 hours. Remove side of pan and bring to room temperature before serving.

**Cooks’ Note: Baked cheesecake can be chilled, covered, up to 2 days.