Last week I subsisted on pâté and Triscuits and chocolate mousse. It was obscene. But it was that kind of week. I also might’ve been just a tiny bit concerned about asteroids and crazy meteor showers and other things that are way beyond my control. Cuckoo, I know. Don’t judge. The good news is I have chocolate mousse for you.

I mentioned a while back that I had been contemplating chocolate mousse. I finally decided to do something about it. I ended up testing two recipes. The first wasn’t bad, it just wasn’t great. I initially liked the idea of a chocolate mousse recipe that called for egg whites and whipped cream and butter. But it was a bit labor intensive and included a lot of calories that didn’t necessarily need to be there. I felt like I needed to go back to the drawing board.

Since I was getting together with the boys for dinner on Sunday, I figured it would be the perfect opportunity to try out a second recipe. I had a feeling when I stumbled upon Dorie’s top-secret chocolate mousse that the search was over. The recipe only called for a handful of ingredients and was super simple to whip up – I threw it together while catching up with one of the Gregs over bourbon cocktails, and did it all without a mixer.

As always, the Lady Greenspan did not disappoint. The chocolate mousse was rich, intensely chocolate, and perfectly textured – velvety and airy all at once. Totally decadent. It’s definitely a winner in my book. It was the perfect ending to our homemade pasta dinner (more about that later).

adapted from Around My French Table

Using a whisk, stir the eggs into the chocolate one at a time until smooth.

In the bowl of a stand mixer fitted with the whisk attachment or in a bowl with a hand mixer, beat the egg whites with the salt until they start to form peaks. Gradually add the sugar while beating. Continue to beat until the whites are shiny and hold medium-firm peaks. Be careful not to overbeat.

Spoon about one quarter of the whites over the melted chocolate and stir until the mixture is almost smooth. Spoon the rest of the whites into the chocolate mixture, and very carefully fold them in with a large rubber spatula. Be as thorough as you can without overworking the mixture.

Spoon the mousse into a serving bowl or 4 individual bowls. Serve immediately or cover and keep refrigerated until set, about 4 hours.

Cherry season is in full effect! Quick! Get ’em while you still can. The cherries at the farmers’ market have been quite impressive this season, especially considering that some crops were ruined due to the late rain we’ve had this year. A few weeks ago I picked up the most incredible Rainiers. They were plump, slightly blushed golden globes, perfectly crunchy and sweet. I destroyed a pound of them all by myself.

Luckily, there were still a ton of cherries at the market last weekend. So I carefully handpicked two pounds. And went home armed and ready to make a clafoutis.

Within my personal collection of cookbooks, I found five different clafoutis recipes. In Mastering the Art of French Cooking, Julia Child describes clafoutis as fruit flan. That pretty much sums it up. After much debate, I decided to go with the recipe from the Tartine cookbook, which was a hit. Because I’m obsessive, I couldn’t stop thinking about one of the other recipes that I had passed on, so I gave it a go the next day. 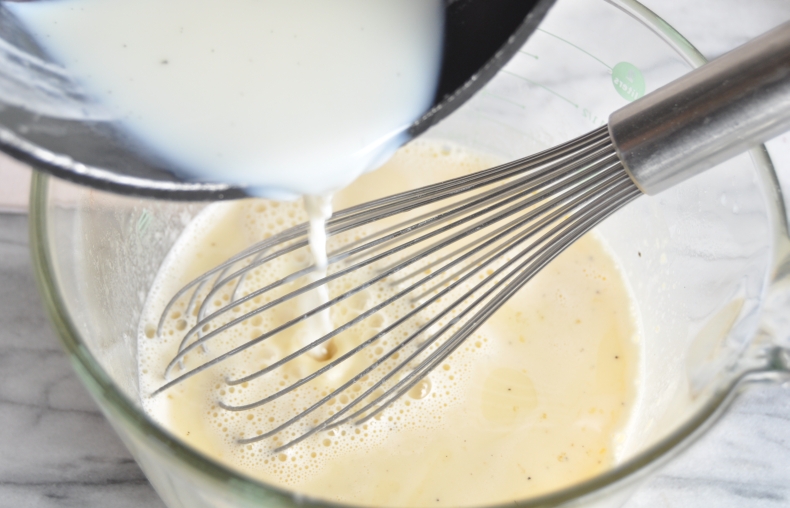 Sadly, the second clafoutis didn’t quite set right, but it had a really nice flavor and was very different from the first. I was determined to make it work so I picked up more cherries and went for round three. After revisiting the recipe, it turns out that I misread the number of eggs, which explains why things weren’t right the first time around. While the redo was much better, I still had stronger feelings for the very first clafoutis.

Tartine’s version is exactly as Julia describes clafoutis – fruit-filled, sweet and eggy. The vanilla infused custard smells heavenly as it bakes. And the cherries are practically ready to burst when the clafoutis comes out of the oven. It’s surprisingly light for a custard. You might actually be shocked by how much of it you accidentally eat in one sitting. Clafoutis is the perfect summer dessert because you can pretty much use any stone fruit or berry that’s available. And it’s the easiest thing to throw together, which means less time in the kitchen and more time to enjoy these long sunny days.

adapted from Tartine by Elisabeth Prueitt and Chad Robertson

In a small saucepan, combine the milk, sugar, vanilla bean, and salt. Place over medium heat, stirring to dissolve the sugar, until just under a boil. While the milk mixture is heating, break 1 egg into a heatproof mixing bowl, add the flour, and whisk until the mixture is smooth. Add the remaining 2 eggs and whisk until smooth.

Remove the saucepan from the heat. Slowly ladle the hot milk mixture into the egg mixture, whisking constantly. Add the almond extract and whisk until incorporated. Pour the mixture into the prepared mold and add the fruit, making sure that the fruit is evenly distributed.

Bake until just set in the center and slightly puffed and browned around the edges, 30 to 35 minutes. Remove from the oven and raise the oven temperature to 500°F. Evenly sprinkle the sugar over the top of the clafoutis. Return to the oven for 5 to 10 minutes to caramelize the sugar. Watch carefully as it will darken quickly.