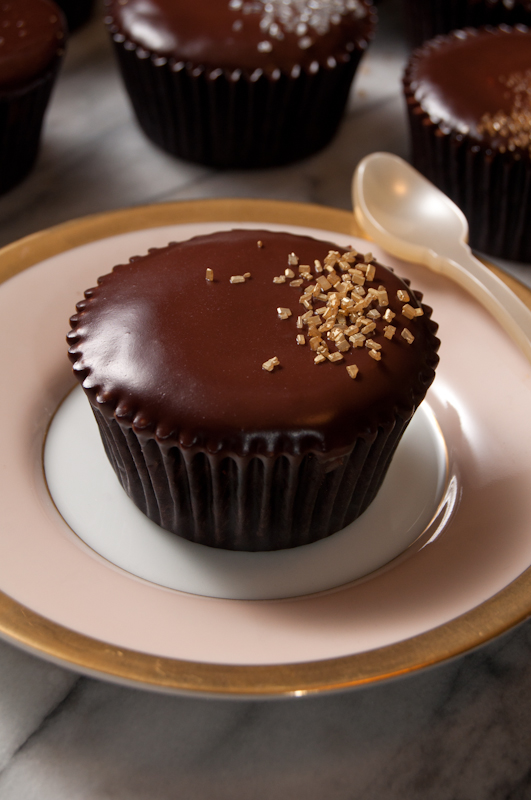 I noticed recently that the sweets around here have been very chocolate-centric. I meant to remedy this. There were citrus desserts in the works. But then these cupcakes happened. And I’m super excited about them. Let me explain. 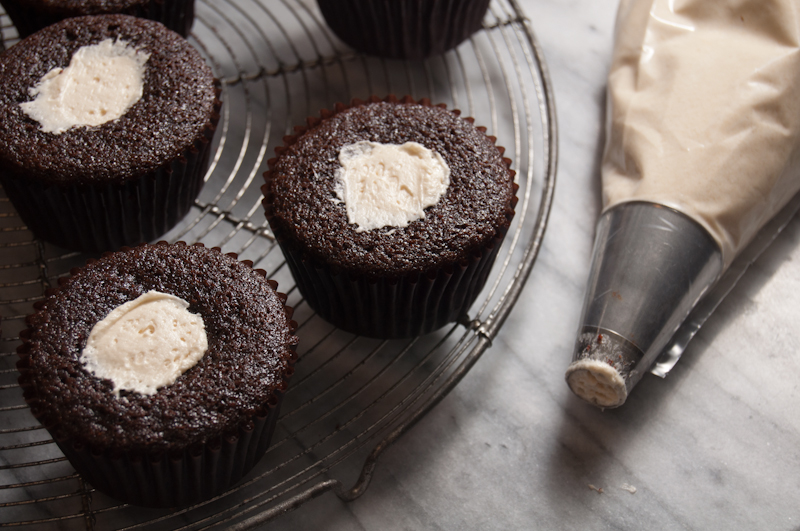 There were a couple of birthdays to celebrate, and I was racking my brain for a dessert that was suitable for a bunch of dudes. At first I thought some sort of s’more concoction would do the trick. I also liked the idea of a grown-up Hostess cupcake. Then I realized that a boozey sweet treat was most appropriate for this group of young fellas.

And then it became obvious that an Irish car bomb cupcake was going to cover all of the bases. I can’t actually remember the last time I had an Irish car bomb, though I’m guessing it was sometime in my early twenties. I don’t recall ever being too fond of them, but I really liked the idea of them in cupcake form. For the sake of research, I did a car bomb while these were baking in the oven. It made for a fun Thursday night at home to say the least.

This little car bomb cupcake is the bomb (yes, I’m totally from the 90’s). It’s a hybrid of Deb’s cupcake and a Hostess cupcake. It’s a chocolatey Guinness cake filled with Baileys buttercream and glazed with Jameson spiked ganache. I threw in a little gold and silver sparkle for good measure (and because I can’t resist the bling), which gives them that sort of “pot of gold” effect, making these perfect for St. Patty’s day. Bottoms up! 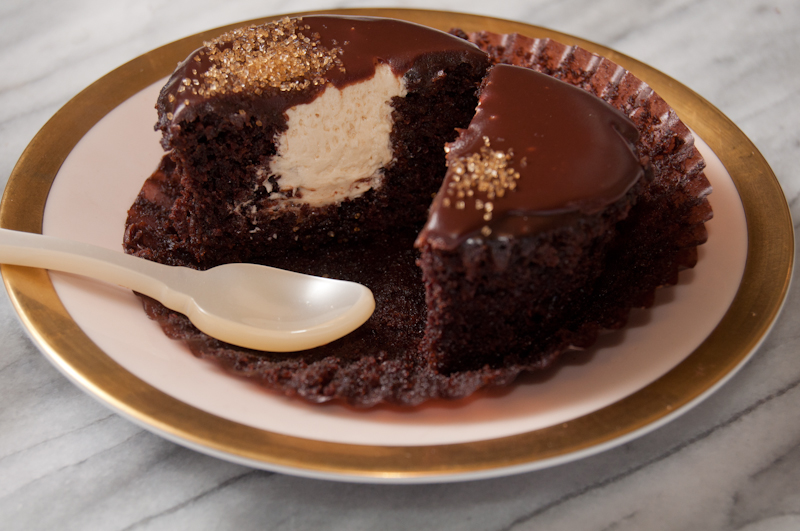 1 cup stout (such as Guinness)

Bring beer and butter to a simmer in a heavy saucepan over medium heat. Add cocoa powder and whisk until mixture is smooth. Cool slightly.

Whisk flour, sugar, baking soda, and salt in large bowl to blend. In the bowl of a stand mixer fitted with the paddle attachment, add the eggs and sour cream and beat until combined. Add the chocolate mixture to sour cream mixture and beat just to combine. Add the flour mixture and beat briefly on low speed. Using a rubber spatula, fold batter until completely combined. Divide batter among cupcake liners, filling them 2/3 to 3/4 of the way. Bake until tester inserted into the center comes out clean, about 17 minutes. Let cool in the pans for 5 minutes, then transfer to racks to cool completely.

for the Baileys buttercream:

In the bowl of a stand mixer fitted with the paddle attachment, add butter and beat on medium speed for several minutes, until light and fluffy. Slowly add the sugar, a few tablespoons at a time.

When the frosting looks thick enough to spread, drizzle in the Baileys and whip until combined. If the frosting becomes too thin, beat in another spoonful or two of confectioners sugar.

or the small end of a large pastry tip, insert into the center of the cupcake and remove a small hunk of the cake to create a well.

Repeat with the remaining cupcakes.

When all of the cupcakes have been filled, dip the tops of each cupcake in chocolate glaze, letting excess drip off. If the glaze gets too thick, set over a pan of hot water until it melts slightly and stir. Let stand until set, about 30 minutes. Embellish with sprinkles.

Cupcakes will keep, covered, for up to 2 days. 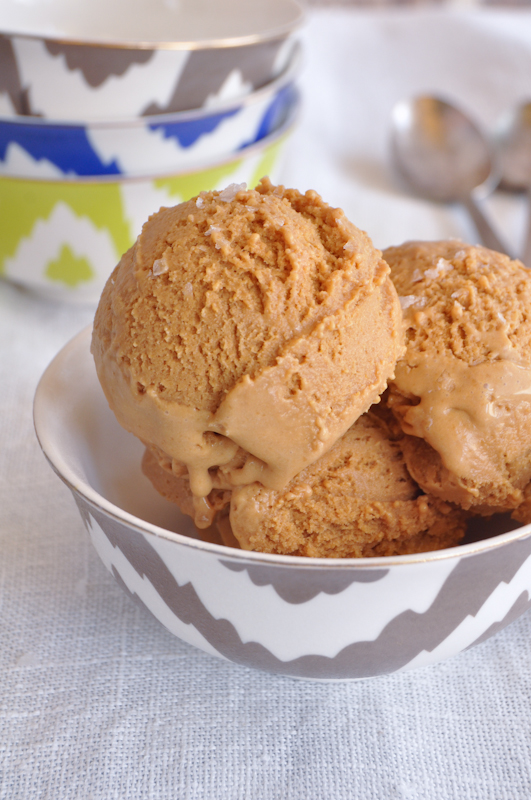 This is the reason you wait in a line that goes out the door and around the corner for a scoop of ice cream. This is how you get hooked on Bi-Rite Creamery.

Bi-Rite Creamery just released Sweet Cream and Sugar Cones, a collection of their most beloved ice creams and sweet treats. I have a few favorites, like brown sugar ice cream with a ginger-caramel swirl, and malted vanilla ice cream with peanut brittle. But because I am a purist, I had to go for the salted caramel first.

This is surprisingly easy to make. It starts with a dry caramel, which is then incorporated into the ice cream base. And then the whole thing goes into the ice cream machine, and POW! You’ve got the richest, deepest caramel-flavored bowl of frozen heaven. It’s all at once sweet and salty and just a tad bitter. And oh so creamy. Give it a go if you’ve never been to Bi-Rite. Then you’ll know what all the fuss is about.

from Sweet Cream and Sugar Cones

by Kris Hoogerhyde and Anne Walker

makes about one quart

Set the cream by the stove so it’s at hand when you need it. Measure out 1/2 cup of the sugar and set near the stove; you’ll use this for the caramel (the rest will go with the yolks). Put 2 tablespoons of the sugar in a heavy nonreactive saucepan  and put the pan over medium-high heat. When the sugar is melted around the edges and starts to turn amber in places (about 2 minutes), stir the mixture gently and add another 2 tablespoons sugar to the pan.

Continue to add what remains of the 1/2 cup of sugar 2 tablespoons at a time, stirring frequently and allowing most of the sugar to melt before you add more. Watch carefully as the sugar darkens, stirring gently to help it melt evenly.

When the caramel becomes a dark mahogany color, remove the pan from the heat and immediately but slowly pour the cream into the pan. (The mixture will steam and bubble up, so wear oven mitts and be very careful to avoid splatters and steam burns.) When the bubbling subsides, gently stir to completely blend the cream into the caramel. If you have lumps of hardened caramel in your pan, simply put the pan over low heat and stir until the caramel is melted.

Once the caramel is completely smooth, stir in the milk along with the salt and put the pan over medium-high heat. When the mixture approaches a bare simmer, reduce the heat to medium.

In a medium heatproof bowl, whisk the yolks just to break them up, then whisk in the remaining 1/4 cup sugar. Set aside.

Cook the mixture carefully over medium heat, stirring constantly, until thickened, coats the back of a spatula, and holds a clear path when you run your finger across the spatula, 1 to 2 minutes longer.

When the base is completely chilled, freeze in your ice cream machine according to the manufacturer’s instructions. While the ice cream is churning, put the container you’ll use to store the ice cream into the freezer. Enjoy right away, or for a firmer ice cream, transfer to the chilled container and freeze for at least 4 hours.

Note: This ice cream has a much softer consistency than other ice creams due to its higher sugar content. As a result it does not work well with ice cream cakes and pies.

There was an error retrieving images from Instagram. An attempt will be remade in a few minutes.